You are here: Home1 / Our Teachers2 / Miss Pascale 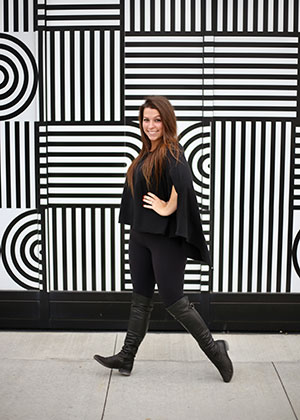 Since her dance training began in Calgary at age 5, Miss Pascale has won many awards in Ballet, Contemporary, Ethno-Cultural, Hip Hop, Jazz, Lyrical, Musical Theatre, and Tap. Over the years, she also trained in Bollywood, Broadway, Dancehall, House, Popping, and Soca in Calgary, Vancouver, Toronto, and New York City. She was honored with the Tammy-Lynn Powers Memorial Tap Scholarship awarded to one dancer who exemplifies the same dedication and love of dance. She is a recipient of the Al Gilbert Dance Award in Tap 9, the Central Memorial Excellence in Dance Award, and the Fine and Performing Arts Certificate from the Calgary Board of Education. Miss Pascale completed her training in the professional program at Decidedly Jazz Danceworks while pursuing her studies at the University of Calgary where she graduated with a Bachelor of Arts in Dance degree specializing in Contemporary and Jazz.

Miss Pascale’s love of performance has brought her to dance in Afro-Caribbean and Urban styles with Casa De Naz at many venues and events such as The GlobalFest and The 4th Street Lilac Festival. She has performed at Dance Montage and Dance@Night with The School of Creative and Performing Arts and she appeared on City-TV Breakfast Television, NUTV in Calgary, and Driving Alberta in Edmonton. She has also taught workshops and performed in the Calgary community for various fundraisers.

Miss Pascale started teaching and doing choreography at a very young age, including Dance Fusion with The Centre for Performing & Visual Arts at Central Memorial High School, and Charlie and the Chocolate Factory with The Alberta Dance Theatre for Young People.

During her 5th season with Diversity’s competitive team, she was delighted to engage in Dance the Magic at Disneyland with her students. In 2019 she received her Adapt Teachers Training School Certificate in Toronto. Miss Pascale is thrilled to start her 10th season at Diversity Dance and Performing Arts. She cannot wait to share her passion, knowledge, and experience with her old and new students.